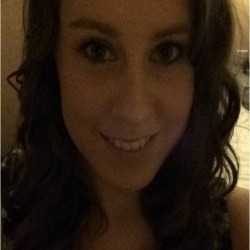 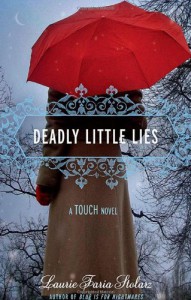 Goodreads Synopsis: Last fall, sixteen-year-old Camelia fell for Ben, a new boy at school who had a very mysterious gift – psychometry, the ability to sense the future through touch. But just as Camelia and Ben's romance began to heat up, he abruptly left town. Brokenhearted, Camelia has spent the last few months studying everything she can about psychometry and experiencing strange brushes with premonition. Camelia wonders if Ben's abilities have somehow been transferred to her.

Ben returns to school, but he remains aloof, and Camelia can't get close enough to share her secret with him. Camelia makes the painful decision to let him go and move on. Adam, the hot new guy at Knead, seems good for her in ways Ben wasn't. But when Camelia and Adam start dating, a surprising love triangle results. A chilling sequence of events uncovers secrets from Ben’s past – and Adam's. Someone is lying, and it's up to Camelia to figure out who – before it's too late.

This was basically like reading the first book all over again. She was yet again receiving threats, never mind that she was kidnapped before she again does not inform her parents or the police blah blah blah, there was no development in the story whatsoever! The dialogue is awful as it seems we get nowhere from the conversations between the characters, Camelia’s friends have their own family drama but all they ever want to talk about is her and Ben, so boring! Camelia also went back and forth between trusting Ben in the first book and then he saves her life for the second time so you think she’d fully trust him but no she still doubts him in this one, what more does she want??

The teachers at their school also just let bullying happen by looking the other way when students were pulling pranks on Ben and calling Wes names, what kind of school is that! I don’t believe that a school would just let this much destructive behaviour happen in real life. We were also introduced to a new character Adam. After only 3 dates, where all Camelia talked about was Ben, he said he loved her…hold up, what?! You can see how all this is really rushed in order to get to the conclusion of the story.

Everything wrong with the first book just carried over to this one, there was absolutely no character development, the story didn’t progress in any way, I can’t think of anything positive about it. I just can’t deal with this series, maybe it gets better maybe it doesn’t but either way I won’t be continuing with it.